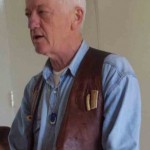 Over many years, I have been exploring the idea that human language and culture emerged in our species not purely through gradual Darwinian evolution but in a cumulative process culminating in sudden revolutionary change. The details of my ‘sex strike’ theory remain controversial, but the general idea that the transition to language was a ‘major transition’ or ‘revolution’ (often termed the human revolution) has been current for many years and is now widely agreed. Read more here.

I do science; I also do political street theatre. I hope you’ll respect the science, but please don’t take my theatrical pronouncements too seriously or literally. A sense of humour is presupposed!

The Government of the Dead video here.

See the Guardian’s report of the Alternative Summit here.

See my August 2008 lecture on Science, language and the origins of religion here.