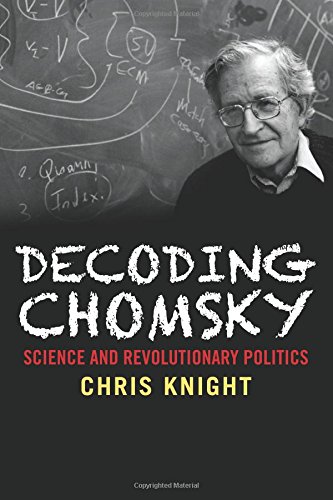 Occupying a pivotal position in postwar thought, Noam Chomsky is both the founder of modern linguistics and the world’s most prominent political dissident. Chris Knight adopts an anthropologist’s perspective on the twin output of this intellectual giant, acclaimed as much for his denunciations of US foreign policy as for his theories about language and mind. Knight explores the social and institutional context of Chomsky’s thinking, showing how the tension between military funding and his role as linchpin of the political left pressured him to establish a disconnect between science on the one hand and politics on the other, deepening a split between mind and body characteristic of Western philosophy since the Enlightenment. Provocative, fearless, and engaging, this remarkable study explains the enigma of one of the greatest intellectuals of our time.

“’Decoding Chomsky’ reads like a detective novel. So many of the arguments I found right on the mark, but I would recommend it just for the pleasure of reading Knight’s great English prose, particularly his talent for understatement. A truly fantastic work, simply brilliant. I could not put it down.

“I can say that this is the best critique of Chomsky from the left that I have ever read. I disagree with Knight quite profoundly on a number of key issues, but in every chapter I learned something new and, in fact, found myself agreeing with him more and more as the book progressed.”

— Frederick Newmeyer, author of The Politics of Linguistics.

“This is Chomsky from a new perspective, the perspective of a social anthropologist. It connects his science with his politics in a novel and convincing way. Knight has dug deeper and made more interconnections than anyone has done before. The result is truly revelatory.”

— Michael Tomasello, author of A Natural History of Human Thinking.

“Chris Knight has done the intellectual world a favour by exploring, with a critical and comprehending eye, the twists and turns of the thought of Noam Chomsky. Anyone who wants to understand the political and intellectual development of ideas that have dramatically altered modern science and political activism should read this book.”

“Few disagree that language has been a game-changer for the human species. But just how we came by language remains hotly contested. In ‘Decoding Chomsky’, Chris Knight strides into this minefield to bravely replace miraculous leaps and teleology with a proposal that actually makes evolutionary sense.”

— Sarah Hrdy, author of Mothers and Others: The Evolutionary Origins of Mutual Understanding

“‘Decoding Chomsky’ was a decade in the making and may be the most in-depth meditation on ‘the Chomsky problem’ ever published. A compelling read.”

“This is one of the most exciting scholarly books I have read in years. ‘Decoding Chomsky’ will be required reading for anyone at all interested in the history of intellectual and political thought since the 1950s.”

— David Golumbia, author of The Cultural Logic of Computation.

“Chris Knight tells a compelling story with startling clarity and forceful elegance, about the bizarre results of studying language, that most human of faculties, by removing it as far as possible from lived human experience. He provides a persuasive explanation for Chomsky’s strategy that reveals striking perspectives on the relationship between science, politics and values.”

— Marek Kohn, author of As We Know It: Coming to Terms with an Evolved Mind.

“This book provides a fascinating account of the disconnect and symmetry between Chomsky’s value-free science and his science-free politics. Knight roots this in the tension between Chomsky ‘s detestation of the US military and his dependence on military funding for his linguistic research.”

“Decoding Chomsky is a groundbreaking analysis of the wide chasm that now exists between modern language science and Chomsky’s view of language. A must-read for anyone trying to understand the history and trajectory of Chomsky’s ideas.”

“Intellectually hip and iconoclastic, ‘Decoding Chomsky’ surveys 1950s McCarthyite politics and 1960s student unrest in order to get a handle on the extraordinary influence of Noam’s ideas. If you’re a former New Left protestor against university collaboration with the US war machine or a current 21st-century anti-war student, you’ll find Knight’s chapter on MIT’s historical relationship to the Pentagon – titled ‘The Most Hideous Institution On This Earth’ – especially cutting-edge, ground-breaking and informative.”

“Knight says his ‘subversive intention’ is ‘to serve justice on Chomsky the scientist without doing an injustice to Chomsky the conscience of America.’ Now why should that be subversive? Any voice critical of Chomsky risks being dismissed as yet another right-wing defender of political orthodoxy, but given even the most superficial examination of Knight’s biography one could hardly question that he supports the substance of Chomsky’s views (as do I). Nonetheless, he shows how Chomsky has acquiesced in – more than that, has participated in and abetted – a radical post-war transformation of the relation of science to society, legitimating one of the significant political achievements of the right, the pretense that science is apolitical.”

“Social anthropologist Chris Knight has, almost miraculously, solved the Chomsky Problem. I’ve been trying to solve it for twenty years; I now feel the euphoria that one of us has solved it. ‘Decoding Chomsky’ is an astonishingly well-written and researched volume that will probably be the most important work in the history of ideas, post World War II, that you’ll read for quite some time. It’s so lucid and well-researched and intellectually and emotionally gripping I couldn’t find a fault with it, though I tried.”

For more on the book, and on Chomsky, see:
the Science and Revolution website.